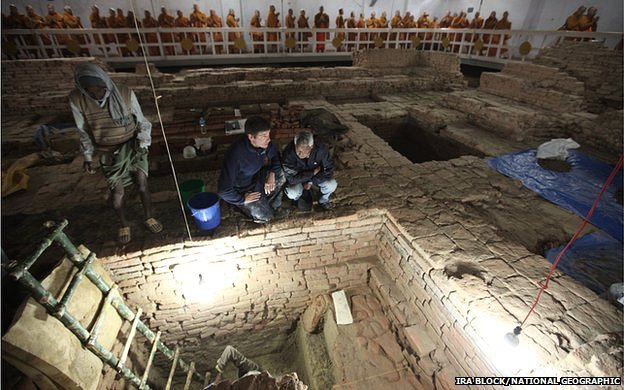 Archaeologists digging at Buddha's birthplace have uncovered remains of the "earliest ever Buddhist shrine".
They unearthed a 6th Century BC timber structure buried within the Maya Devi Temple at Lumbini in Nepal.
The shrine appears to have housed a tree. This links to the Buddha nativity story - his mother gave birth to him while holding on to a tree branch.
Its discovery may settle the dispute over the birth date of the Buddha, the team reports in the journal Antiquity.
Radiocarbon

Every year thousands of Buddhists make a holy pilgrimage to Lumbini - long identified as the birthplace of Siddhartha Gautama, who became the Buddha.
Continue reading the main story

Yet despite the many texts chronicling his life and teachings, it is still uncertain when he lived.
Estimates for his birth stretch as far back as 623 BC, but many scholars believed 390-340 BC a more realistic timeframe.
Until now, the earliest evidence of Buddhist structures at Lumbini dated no earlier than the 3rd Century BC, in the era of the emperor Ashoka.
To investigate, archaeologists began excavating at the heart of the temple - alongside meditating monks, nuns and pilgrims.
They unearthed a wooden structure with a central void which had no roof. Brick temples built later above the timber were also arranged around this central space.
To date the buildings, fragments of charcoal and grains of sand were tested using a combination of radiocarbon and optically stimulated luminescence techniques.
"Now, for the first time, we have an archaeological sequence at Lumbini that shows a building there as early as the 6th century BC," said archaeologist Prof Robin Coningham of Durham University, who co-led the international team, supported by the National Geographic Society. 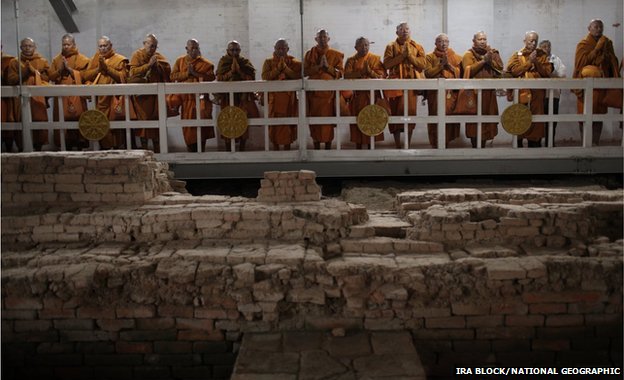 The holy site remained open for meditation while archaeologists excavated
"This is the earliest evidence of a Buddhist shrine anywhere in the world.
"It sheds light on a very long debate, which has led to differences in teachings and traditions of Buddhism.
"The narrative of Lumbini's establishment as a pilgrimage site under Ashokan patronage must be modified since it is clear that the site had already undergone embellishment for centuries."
The dig also detected signs of ancient tree roots in the wooden building's central void - suggesting it was a tree shrine.
Tradition records that Queen Maya Devi gave birth to the Buddha while grasping the branch of a tree within the Lumbini Garden.
The discovery could aid conservation efforts at the holy site - which has been neglected despite its Unesco World Heritage status.
"These discoveries are very important to better understand the birthplace of the Buddha," said Ram Kumar Shrestha, Nepal's minister of culture, tourism and civil aviation.
"The government of Nepal will spare no effort to preserve this significant site." 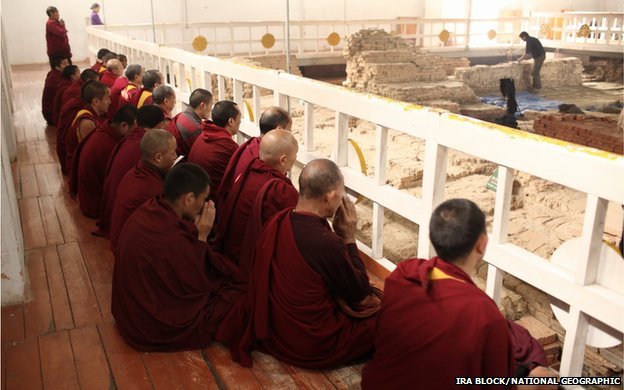 Archaeologists hope their discovery will aid conservation efforts at the site